What is OSI Reference Model and IP Set Model

All Network Protocol are categorized by conception of Layers. Layers are mainly used by OSI Reference Model and IP Set Model.

TCP/IP , which is defacto standard in internet , is based on IP Set Model, but the words "Layer" is indicated that it is based on OSI Reference Model.

A comparison between the OSI reference model and the IP set model is shown in the table below.

The roles of each layer are as follows.

Physical requirements such as cable type and connector shape, and noise reference value for transmission of bit in transmission medium (electricity or light) are defined.

Define how to communicate directly or between devices connected via Layer 2 equipment (L2 switch etc.). It specifies how to make concrete bit strings and so on. The communication destination at this layer is not limited to the device you want to communicate with, but it may be a data transfer device such as a router or L3 switch.

Ethernet is the most popular implementation, but there are other PPP , PPPoE, ATM, frame relay, etc.

Though the Data Link Layer can be used depending on the Physical Layer, for example, OM3 type of optical multi-mode corresponds widely from 100 Mbps to 100 Gbps.

Determine the communication route to the device you want to communicate (destination IP address for IP). (Route selection by routing etc.)

IP is the de facto standard for implementation.

It manages the communication status between the source device and the device that wishes to communicate. (Error correction, retransmission control, etc.)

TCP/UDP is the de facto standard for implementation. Whether to use TCP or UDP is chosen depending on the protocol of the Application Layer, but in some case, for example NTP or syslog, etc, RFC it is said that "should be used with UDP", software which can be set by TCP Yes.

The famous implementation is ASCII mode of FTP. For example html files created on Windows will be [character code Shift-JIS] and [line code CR + LF], but if you upload this to Linux under FTP as ASCII mode, you can see [character code EUC-JP] and [ Code LF] automatically.

If you do not want this conversion, use binary mode.

For example, you can set as follows for the famous FTP client software "FFFTP". 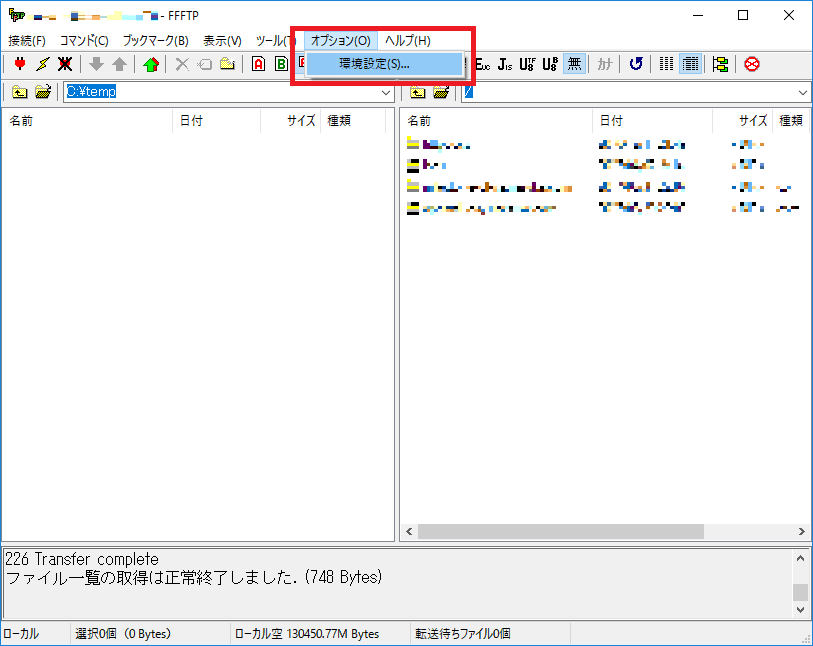 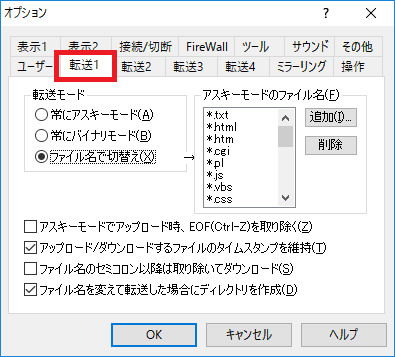 Define the communication procedure between applications. (Format of http etc.)

For example, when you want to download html files etc on web server, it is job of this layer to use GET command.