IP address is the address on network communication.

The NW device such as a "Router" looks up the IP address of Host-B as the destination, decides the communication route, and eventually arrives at Host-B. These route decision processes are called routing.

Nowadays, IP is the world standard communication method used on the Internet. IP addresses are always allocated to terminals and network devices that communicate with the Internet.

The IP address is composed of 32 bits, converted to decimal number by 8 bits, and it is expressed as being separated by dot(.) . 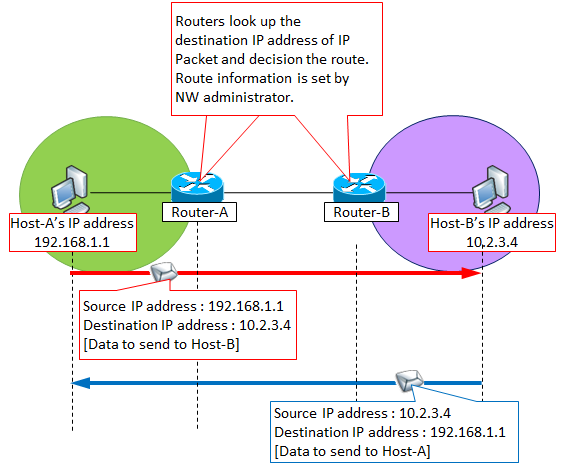 Usage according to IP address range

Network addresses may also be referred to as "Network Segments", or simply "Segments", by alias. 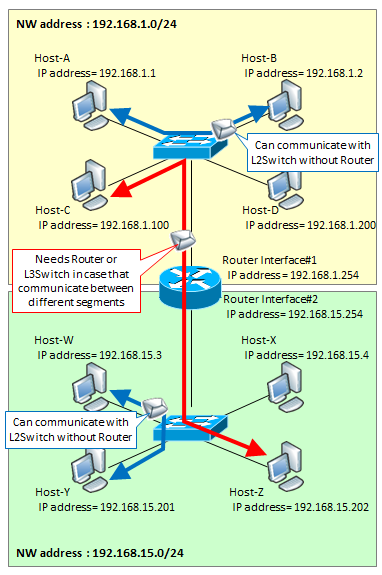 Classful means that the number of bits in the "Network Part" is determined by the range of the IP address. Specifically, it is as follows.

The idea of classful is almost not used now. The reason is that efficient allocation is impossible due to depletion of IP address. Particularly in class A, the theoretically host unit can allocate terminals of 2 to the power of 24 ≈ 16 million, but in reality such a configuration is impossible.

It is better to put about 256 terminals at various network addresses than that. Therefore, we removed the concept of class so that we can freely decide the network part with all IP addresses. That is the Subnet Mask. Also, this idea is called classless.

This classless routing support is called CIDR (Classless InterDomain Routing), and the method that Routing Protocols that did not originally support CIDR (RIPv 1 etc) supports CIDR with limitasions is called FLSM (Fixed Length Subnet Mask) . And, the method which is created for overcoming the FLSM limitasions is VLSM which is handled by RIPv2, OSPF, EIGRP, BGP, and so on. Many commentaries are difficult to understand in this topics, but this article details the intelligible explanation in detail. 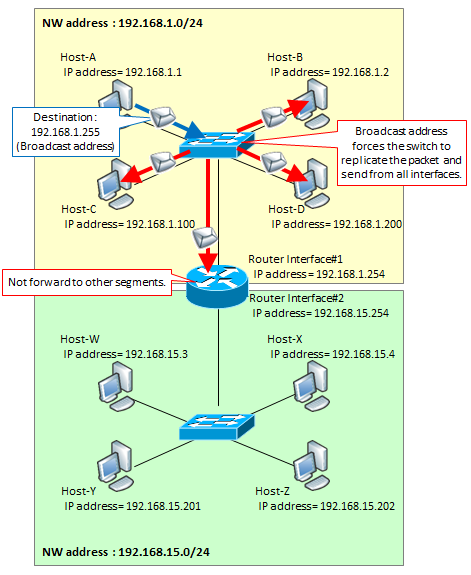 This address band is reserved in the global address band which can be used for explanation of configuration guide etc. of each maker. (It is supposed not to be used in actual communication)

How to check your IP address

If it is Windows, you can check it by typing "ipconfig" from the command prompt.

In this column, if private IP address is displayed instead of global IP address and communication is possible with the Internet, it is NAT (PAT) converted by the router. For NAT, please see here.

If you want to check the IP address after NAT conversion, you can check it on the site etc. below.

Next to the message "Your global IP address is:" is the IP address after NAT conversion.

あなたが成長の日々を歩めますように。
What is ICMP ~ Difference from layer and TCP, about how to use ~