Let's have a look up the series of IP communication about browsing a web server site(DNS and http) as representative.

PC in first resolve the name(site URL) by DNS. For example, if want to access to "www.yahoo.co.jp", query the IP address of "www.yahoo.co.jp" to DNS server set to PC. Some DNS servers are limited internally, others are published on the Internet. As an example of published, IP address "8.8.8.8" is a famous DNS server provided by google for free.About basic knowledge of DNS, reffer this link. 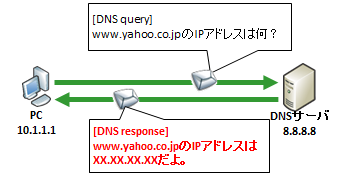 Next, toward the IP address of www.yahoo.co.jp, establish the TCP connection. In first, send the TCP syn from PC
to Web Server, and from Web Server TCP syn/ack is sent as return. And, TCP ack is sent from PC. Then establishment is done. This negotiation is called Three way handshake.

Request for html file by http GET method

PC does not wait the opponent after sends TCP ack, does more communication of http GET method.

For example, send the strings with ASCII in initial of TCP payload,

which is conforming to the http Standard.

after /(slash) following request file name such as "index.html" in principle but in almost site, requesting only / results in returnning the file set to web server as default.

When requesting above is done, there comes from Server to PC the strings

and required files is sent. If file size is more than 1460 Byte over MSS value, Server OS or Application sends two or more packets divided by TCP segmentation. (not IP fragmentation but TCP segmentation）

"200" is the value of HTTP status code and means "Successful". 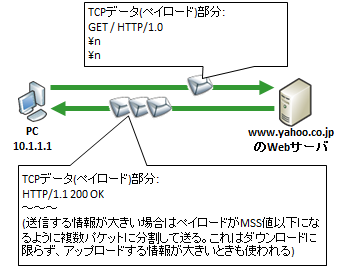 (case sensitive) and Enter twice, then return the strings below with ascii

Like this, http version need not match between client and server. In caution, if you miss spell, www.yahoo.co.jp
site returns 400 Bad Request immediately. This means telnet client is sending message every input character.

It is inefficient, but not violate with HTTP Standard.

as seen above, http is represented in a form easy to understand by humans. There are other such communication such as SMTP, FTP, SIP etc.